Covering the Capital City in the Latest Fashion 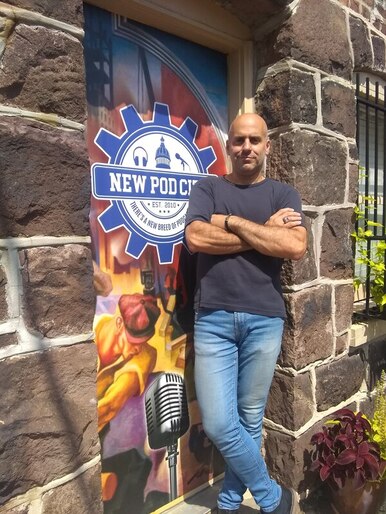 Frank Sasso, co-founder of New Pod City in Trenton, NJ.
as seen in the Trenton Downtowner Newspaper
BY Diccon Hyatt
​
Something new is in the air — or Ethernet -- thanks to Trenton's Frank and Christina Sasso. The married couple are podcasters, and their show "Trenton Waves," is part of a growing podcast empire established by Frank and run out of a studio at the Base Camp Trenton co-working space on East Front Street.

Frank Sasso got his start in podcasting in 2010 with the "Who's Your Daddy GODcast," a freewheeling roundtable discussion of religious issues. "It's a Bible study kind of thing but with attitude," Sasso says.

At the time he started it, Sasso was working a temporary job at an insurance company and found himself wanting something to listen to while he worked at repetitive tasks. "There wasn't a podcast out there that I wanted to hear, so I thought, why not just create the kind of show I wanted to listen to?" The podcast is still going, has over 25-K active listeners, and is nearing its 10th year anniversary.

In February, the Sasso's launched a new podcast called "Trenton Waves" which consists of interviews with Trenton personalities. The first episode featured Mayor Reed Gusciora. A recent episode was an interview with Vont Leak, an 18-year-old who has just launched his own podcast called "Stay Woke."

But Sasso's company, New Pod City, is not just about producing his own shows. He also sells services to other podcasters including hosting, coaching, celebrity impressions, artwork, and social media posting. He charges $70 for two hours of studio time. He says his is the only podcasting hosting service in New Jersey. Sasso has led an eclectic career in the arts and business.

Some of his more recognizable gigs in the 1980s and 1990s include consulting with Disney to help create the computer graphics for the groundbreaking ballroom scene in "Beauty and the Beast." Animation fans might be familiar with his work on the "Ren & Stimpy" cartoon for Nickelodeon. Sasso was the chief penciller for Stimpy, handling "overflow" cells from the main studio. "Whenever I go to a trade show, 'Ren & Stimpy' fans are very identifiable not only by sight but some of them, by smell", he says.

The Trenton City Museum recently hosted "An Animated Evening with Frank Sasso of the Ren & Stimpy Show," where he shared stories of his time in the industry. He is also working on a new animated series called, "The Legends of Valdoria".

Sasso grew up in New York where his father worked for the Post Office and his mother was a matron on a bus for special needs children. His NYC roots (and accent) are why the New Pod City logo touts "a new breed of podcastah."

Sasso signing an original Ren & Stimpy illustration for a fan.
Sasso is a believer in Trenton's potential for revitalization. My wife, Christina always says, "There are so many things going on in Trenton, you can't do them all, but people don't know about it. They just read about gangs. Gangs? This place is like Mayberry!"

In addition to offering podcasting coaching.
​Sasso has some general advice for aspiring podcasters. "We're living in a golden age of open communication", he says, "All you have to do is start talking and you can have hundreds if not thousands of people listening. Podcasting is in its infancy. We haven't even scratched the surface of what's possible."

To start that scratching, consider Sasso's thoughts on the following.

The Six Month Rule
Always have three months of expenses in the bank. After that, if you can live off the income of your podcast or other creative project, then and only then should you consider quitting your day (or night) job.

Consistency
If you commit to a weekly schedule, you better make sure the show is up on the same day every week. Late shows can cause an audience to dwindle.

Podcast Engagement
Interact with listeners, and do things like read emails on the air to show that you have genuine audience engagement. Otherwise any listenership numbers you claim will be questionable to anyone who may want to sponsor your podcast. After establishing an audience there are currently about 8 ways to make money from a podcast. "There is an insane amount of money that can be made out there for sitting there and talking, which you probably already do anyway," Sasso says.

Sponsorships
Essentially this means getting companies to advertise on your podcast.

Merchandise
Selling merchandise can be a big money maker, especially with a highly engaged fan base.

Events
Live podcast recordings and selling tickets to public appearances are another great way to make money from a large audience.

Donations
Many podcasts ask their audiences to support them directly. One popular model is to release one "bonus" episode for every regular episode that is accessible to those who support the artist using a crowdfunding platform such as Patreon or PayPal.